The reversal continued. At first, Lee Seung Gi held the lead, but after three weeks, Park Yoochun managed to overtake Lee Seung Gi. But “the world of Park Yoochun” did not last long. Uhm Tae Woong began to suppress the two idol stars from mid April to ascend the throne of Wednesday and Thursday drama ratings champion. Can be described as “the rebellion of the bottom-ranked.” The viewership ratings competition between the three dramas was extremely intense. The difference in ratings between the first and third place was only about 2% to 3%. So, which viewers watched which drama? Which drama shined the most for the past 2 months? eDaily conducted the analysis on the audience, and listened to the evaluation of the drama critics.

▲ Which viewers watched the Wednesday and Thursday dramas of 3 major TV stations?

The audience of the 3 dramas varied greatly. According to statistics of media research agency, the audience of 3 dramas is compared according to sex and age based on the viewership ratings of the last 3 weeks (May 2nd to May 17th). 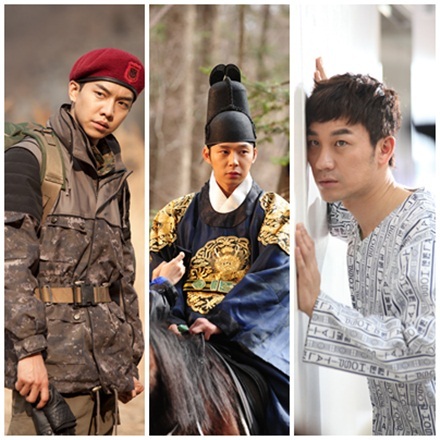 A PD of KBS drama department concluded, “‘Man of Equator’ is a traditional drama, so is well loved by middle-aged. ‘Rooftop Prince’ is about lovely acting by Park Yoochun and flower boys gang of 4, so young women prefers this drama. ‘The King 2 Hearts’ is related to the story of the North-South military issues, so is loved by the young male audience.” 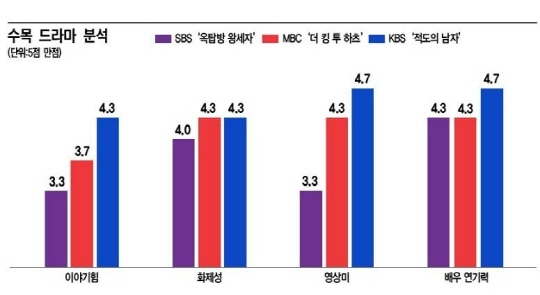 How does experts look at these three TV series? Several professional drama critics gave their scores from 1 to 5 the full mark on the areas from of topical, plot, acting skill of lead actors, aesthetic feeling of the scene and etc. “Man of Equator” got the highest mark in every categories. It got the highest mark in aesthetic feeling of scenes. The drama made use of light to visually portray good and evil of the roles, adding to the tension. The strength of the story plot is also very powerful. A critic commented: “‘Man of Equator’ tells the revenge story of children and father in hostility, it’s the first drama that shows the classical myth of Oedipus and the shadow of father in the modern history.” Uhm Tae Woong was also winning the praises of drama critics. But unfortunately, with the focus on the revenge plot, Lee Bo Young’s role did not get the attention it deserved.

“The King 2 Hearts” and “Rooftop Prince” got the evaluation that story plot is slightly regretted when comparing with acting skill of actors and topical. The comment said that “Rooftop Prince” uses time traveling as background, attempting to combine the historical drama and comedy suspense together, but the degree of completion is inadequate.

The link up of Lee Seung Gi before and after he become the king in “The King 2 Hearts” is slightly poor, and the concentration of the story plot is relatively weaker.

But the lead actors of the two dramas received critical acclaims.