On the production launch event for MBC drama series The King 2hearts held on the afternoon of March 8th, 2012 at Imperial Palace Hotel in Seoul, the lead actress Ha Ji Won said, “Does not feel the differences in age with Lee Seung Ki, the filming atmosphere on the scene is very interesting.”

Ha Ji-won said with a smile, “Lee Seung Gi gives a feeling that he’s older when looking at him, it’s really comfortable to film together with him, does not feel any age differences at all.”

Lee Seung Gi also said, “I would also like say so too.” Besides, PD Lee JaeKyu said, “This morning, when both persons shot the kiss scene, they shot naturally just like a lover.” 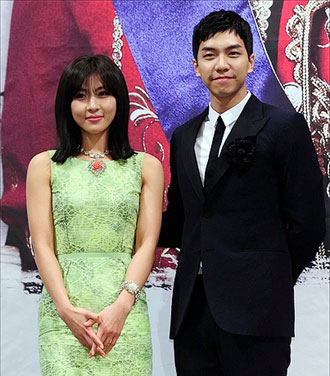 The King 2 Hearts tells the love story between South Korean prince and North Korean special force instructor, and is expected to debut on March 21st, 2012.