After finishing the first filming for The Moon Embracing the Sun drama series, Jung Il Woo expressed his thoughts.

On January 18th, 2012, the official MBC website for The Sun and the Moon published the behind the scene video footage of Jung Il Woo after he finished the first shooting of acting the character of adult Prince Yang Myung.

In the video, prince Yang Myung stands in front of Lee Hwong acted by Kim Soo Hyung, recalling the faint memory of Yeon Woo. He said with a sad face, “If the person I miss passed away, it’s not that you won’t think of her even if you want to forget, people who can leave behind the memory, won’t be forgotten so easily.” 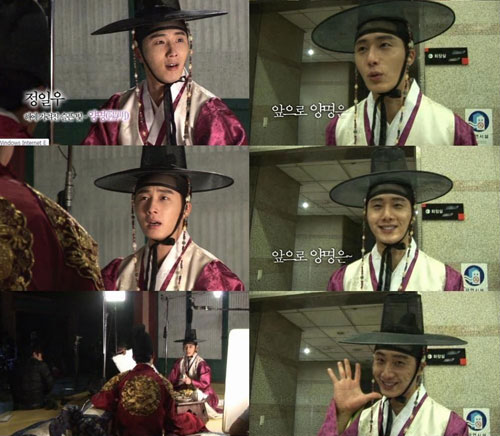 After the first shot, Jung Il Woo concluded his performance, “No matter what there is still pressure, there are many imperfect places. After finished shooting, have to spend effort to find out which areas need further improvement. Then he laughed and added, “Hope that the future transformation of Prince Yang Myung is worth the wait.”

The adult version of The Moon that Embraces the Sun begins from January 19th, 2012.