In the episode 5 of SBS’s Salaryman Chohanji broadcast on the evening of January 16th, 2012, the image of Jung Ryu Won underwent complete makeover, attracted the enthusiastic attention of Internet users.

In the episode, Yeo Chi (Jung Ryu Won) who was always living a luxury lifestyle as the granddaughter of Cheonha Group, is running away with Yoo Bang (Lee Bum Soo) after she is been accused with the charge of murdering her uncle Ho Hae. But she has nothing except to be a beggar. When she is in the state of unbearable hunger, eat the leftover noodle with soybean paste. Even the delivery staff can insult her, and pour the noodle to her head. 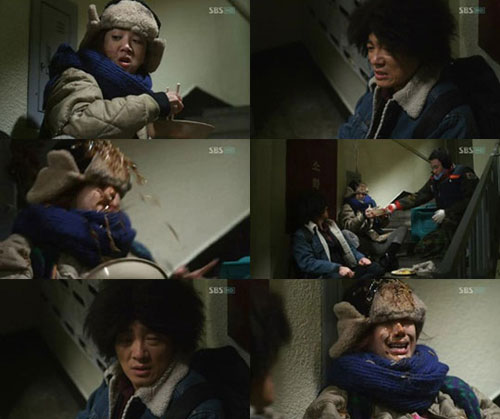 It’s imaginable for the image of Jung Ryu Won in such a situation and scene, but also because of the dress up of little beggar and the all-out acting, she is been in heat discussion by netizens.

One response to “Jung Ryu Won Becomes a Beggar in Salaryman”