Kim Hae Sook: A Thousand Days’ Promise Is Like Poetry

Elegant, competent, knowledgeable, and no lack of warmth and humility, using the heart that is as wide as the sea to understand everyone around, calm no matter in good times or adversity, there is no vanity and hypocrisy mask, has a kind heart. The viewers said, “If there is mother like this in reality that it’s good, but will there really has such a mother?”

Kim Hae Sook is playing the the character of Kang Soo Jung, the mother of lead character Park Ji Hyung (played by Kim Rae Won) who suddenly renounced his engagement two days before wedding in A Thousand Days’ Promise.

The actress Kim Hae Sook is showing dazzling brilliance when entering the fated 50 years old, and its brightness does not lose to new generation of young actors. 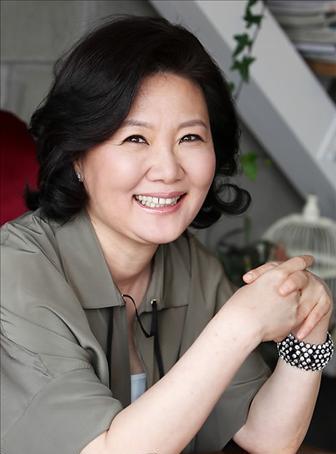 In media interview, Kim Hae Sook said, “Concern about friends, love the children, devote to husband, it looks like very rare, but isn’t it the typical Korean woman? Even if there is unspeakable pain in the heart, but has to suffer everything in silent, but looks as if nothing had happened.

She said: “The straightforward acting is simple, but Soo Ae’r character has lots of emotional scenes, is the kind of people that can move the viewers with delicate inner world. In the process of shaping Soo Jung, viewers and I experience an inner heart struggle together, cry together laugh together.

The son who always the pride of Kang Soo Jung annulled the engagement suddenly just before marriage, and for the first time in her life she suffered major blow from his son. But the hurt from the blow is not as deep as imagined, at least it appears to be so. The inner struggle and impact can be imagined, luckily Soo Jung is enduring all of these silently with her noble character. In order not to let her son to fall into even deeper grief, she chose to suffer all the pain by herself.

“When reading the script, I shed tears continuously due to the sad story, but during actual acting I can’t cried out, feeling very painful. Later I watched the scene where I talked with Seo Yeon (played by Soo Ae) face to face in TV, and it’s possible to see that I was holding back the tears forcefully.” Kim Hae Sook said with a smile.

She said, “I feel it’s not acting when starring in A Thousand Days’ Promise, but is reading a poem. When watching TV series, don’t you feel it’s as if reading a beautiful novel or poetry?”

“Now everyone seems to regard love as too simple. During our era, even when listening to the word of love will feel inexplicable beauty and sadness. By contrast, now the love has become very selfish. A Thousand Days’ Promise is just like a drama produced to look back to the love of that era. Love is not self-centered, but has to accompany with dedication and sacrifice. Watching the drama I will think ‘it’s good if i can have that kind of love,’ although currently Soo Jung is rejecting the love of Seo Yeon and Ji Hyung, but in the end she will stand on the side of his son. If the love of the son is true, then I should accept it.”

The expressions of Kang Soo Jung in the drama is also similar to a poetry. The expressions of eyes is richer and more profound than the meaning contained in 100 sentences. As a mother, all experience of changes on the world can be read from expressions. There are many close-ups of Soo Jung, although it’s very silent scene where even a pin drop can be heard, but it successfully let viewers feel explosive power that is as powerful as earthquake.

“Make a lot of efforts for this drama. Keep fit, cut short the long hair, although the dialog lines is few and proportion of lines is not large, but in order to better the performance of a brand new character, so put in a lot of effort on appearance.”

The transformation of Kim Hae Sook started from SBS TV drama “Life is Beautiful.” In “Life is Beautiful,” she played the role of a mother who bears the burden of a big wealthy families, outgoing, and has gentle appearance and friendly character, just like every normal mother experiencing menopause.

“Do not know since when I have always been playing the role of the mother. Teacher Kim Soo Hyun gave me the chance to act in “Life is Beautiful,” let me had the chance to play an all new image of mother, and this time she created another new character, Kim Soo Hyun is really terrific. No matter as an actor, or as an ordinary woman, I have very much respect to teacher Kim.”

“The words spoke by teacher Kim Soo Hyun in “Precious Family” left deep impression on me, she said, ‘every successful people always has his reasons.’ This sentence always echoes in my mind, ‘do not forget oneself initial dream, do not think oneself is great, even a minor role has the value and meaning of his existence, what I have to do is do my best to play well every role’.”

Kim Hae Sook is one of the actors that value keeps increasing with age. In the upcoming movie “The Thieves,” TV series “Saving Madame Go Bong Shil‎”, you can see her active presence.

“When The Thieves is released, you may not able to accept after seeing my performance in the show, this to me is a new challenge, and chose to join Saving Madame Go Bong Shil‎ because currently it’s hard to find a story that describe the love story of 50 plus years old woman.”

She said, “Although has stepped into mid-50 years old, but I feel I am still a new actress, which made me feel very happy.”

“Age is just numbers, and I am now looking forward to my next transformation, I hate rigid and immutable. Although with increased age with the toll on physical strength with age is harder, but the thought of tomorrow is another unpredictable new day, then my whole body seemed suddenly full of energy.”

One response to “Kim Hae Sook: A Thousand Days’ Promise Is Like Poetry”