Actor Kim Rae Who is showing the charm of posing as father.

In the episode 19 of A Thousand Days’ Promise broadcast of December 19th, 2011, the lead actor Ji Hyung (played by Kim Rae Won) carries the baby born by Seo Yeon (played by Soo Ae) in the arm. The skillful posture is just like a father who always holds the baby, and once the baby is held by him, the baby no longer cries.

On the set for filming the scene days ago, the baby who was unaccustomed and shy to crowd was crying because of too many people on the set, causing the filming process to be interrupted.

The on-site crews and director had tried to coax him, but the baby was still crying, bringing chaos to the set. Eventually the baby was passed to Kim Rae Won who played the role of the father of the baby. After Kim Rae Won held baby into the arm, he gently patted the baby and the baby immediately stopped crying, allowing the filming to continue. 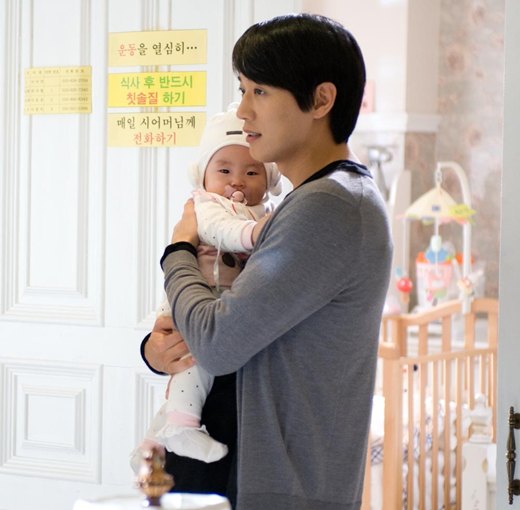 As can be seen from the stills, Kim Rae Won looks to have a taste of been faster. From his position of holding the baby, to the look of baby comfortably in his arms, there was no any inappropriate place been seen. According to official on the set, “The baby also wanted to select people to hold,” “Although only in acting, but when comparing with biological mother, the baby preferred the father Kim Rae Won and mother Soo Ae in the drama.”

A Thousand Days’ Promise tells the love story of Ji Hyung protecting beside his lover who gradually lost the memory.