In the battle of Wednesday and Thursday drama, King 2 Hearts won the war. 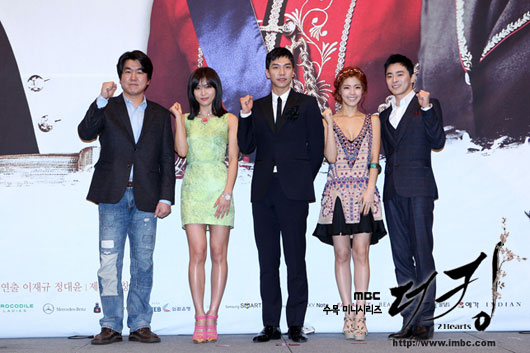 The result is The King 2 Hearts won the victory with rating that more than double the the bottom-ranking Man From the Equator. Rooftop Prince starring Micky Yoochun and Han Ji Min came in second.

The better ratings for The King 2 Hearts has been widely expected as the drama is succeeding The Moon that Embraces the Sun that concluded with over 40% ratings, but nobody would expect that it can lead the rivals with the margin of 7%.

Previously, in order to avoid head to head battle with national drama The Moon that Embraces the Sun that hit ratings over 40%, SBS and KBS had spared no efforts in postponing the debut of new drama by airing replacement programs such as single act drama, but unexpectedly still tasting the defeat.

Although The King 2 Hearts won the first round ratings war, but Rooftop Prince and Man From the Equator have also been receiving praises from the audience. How the ratings war turns up is under the spotlight.