On March 8th, 2012, the official website of MBC drama series The Moon Embracing the Sun published a video clip that features the interview with actor in leading role, Kim Soo Hyun. 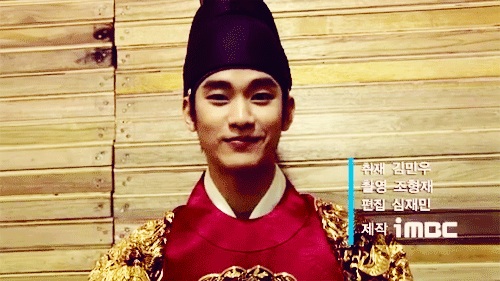 “Hello everybody, I am Kim Soo Hyun who is playing the role of Lee Hwon in The Moon that Embraces the Sun.”

Q: When acting as Lee Hwon, which part is emphasized?
“When I was preparing for the role of Lee Hwon, the “pain” accounted for the largest proportion. As the king, I have everything, although everybody sees me as a supremacy, but to me, it’s a great pain and hurt, this is the part most wanted to show to everybody.”

Q: What’s the similarities between Kim Soo Hyun and the character of Lee Hwon?
“Comparing with Kim Soo Hyun, the character of Lee Hwon seems to be more attractive. Therefore, in the process of filming the TV series, I often think that if I can learn from this character in reality, it would be helpful to daily life. Although there is only one week left now, I will strive to truly change myself to become this character.”

Q: How’s the acting in cooperation with co-actors in the drama?
“In the beginning not familiar with each other, but it was stiff, even when greeting in reality also sounded with very hard tone, just like “hi” “have you eaten” kind like this. Now becoming more and more natural, so everything proceeds really well, but only left a week.”

Q: The Lee Hwon played by Kim Soo Hyun is?
“The Lee Hwon I played is ‘although is the king of the country, but is also the figure who realized the love that the king normally couldn’t realized as a king.’ I am thinking like this.”

Q: What’s the secret for the popularity of The Moon that Embraces the Sun?
“If have to about the secret of the popular, will it not be ‘all in the drama?’”

“Thank you very much for so loving The Moon that Embraces the Sun. Now it’s the final week, not much time left, I feel really strange. Haha. All the actors and staff crews have worked extremely hard, and because of the painstaking, we’re very close together, therefore there is very good effect. I think, it’s very honored to be able to meet so many seniors, co-actors and staff crews. For me, I think it’s hard to have such an encounter again. So at the end with the grateful heart. Really thank you.
Soo-hyun told the audience: Thank you very much so loved and embrace the sun the moon now got left last week, not many, and I feel really strange, all of our actors and all the staff are very hard, very hard and very close, so have a good effect. I think with so many predecessors, colleagues actors and staff met really pleased for me, this encounter should be very difficult ~ So at the end with gratitude of heart. Thank you very much!”