The MBC Wednesday and Thursday drama series The Moon that Embraces the Sun has entering its final countdown with 2 more episodes to go. The plot that is full of suspense has made a lot of viewers can’t wait to watch the next episode.

For audience who likes spoiler, here’s the possible summary text preview for The Moon that Embraces the Sun episode 19, which is based on the novel of the same name which the drama series is adapted from. Note that the storyline of the drama may or may not be followed exactly by the novel, so just read for entertainment purpose. 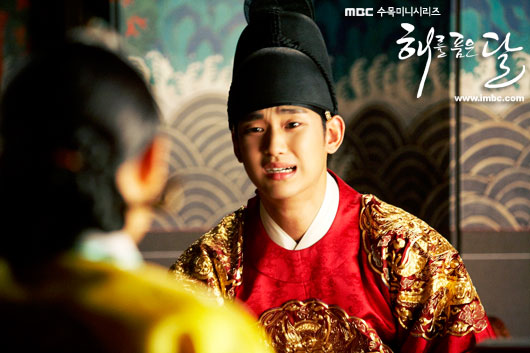 In episode 18, the king Lee Hwon sends a secret decree to Hong Kye Tae of Uigeumbu (royal guard and secret police) to gather the soldiers trained and cultivated by Great Kind’s (Hwon’s father) Woon-Geum (cloud sword, there are five Woon-Geum originally) to the palace, to eliminate the forces of prime minister who plots to rebel.

Yang Myung who hides his identity as a Woon-Geum pretending to participate in the rebellion, and then arrests and submits the gang who secretly conspires the rebellion to the king, wiping out the power of consort clan in one go.

Princess Min Hwa is forced to divorce with Heo Yeom. In the Joseon Dynasty where guilty by connection is very severe, only a divorce can save Yeom from punishment. The princess is then demoted to state slave, and Heo Yeom is deprived of the field and position awarded as emperor’s son-in-law.

Great Empress Dowager Yoon is poisoned to death by the clique of Yoon Dae Hyung who thinks that she no longer has any value in use.

Queen Yoon Bo Gyeong commits suicide when she knew the news of her father’s rebellion. It’s a mistake that she manages to sit on the position of the queen with the help of Great Empress Dowager Yoon and prime minister, as such the state wedding is not recognized, became a virgin ghost.

Because of Yeon Woo is the first crown princess, and thus she is been affirmed as the first queen.