What Yoo Ji Tae, Lee Ki Woo and Rain have in common?

On June 14tth, 2012, an interesting article with the title of “three shoulder men” was posted on a community forum, attracting attention.

The three “shoulder men” mentioned in the article are Yoo Ji Tae, Lee Ki Woo and Rain. In the photo, Yoo Ji Tae and Park Gun Hyung in “Three Fellas” sat side by side in the bathhouse. Park Gun Hyung has short stature, so the Yoo Ji Tae’s shoulder width looks almost double. Imagine that when using wooden ladle for watering the body when taking bath, he probably may have to spend twice the amount of water by others.

Lee Ki Woo is also the well-known “skeleton king” among actors. With height over 190 cm, broad shoulders, and physique that nobody would doubt even if saying that he is a boxing player, he can highlight the ‘famous shoulder’ with even just a casual T-shirt. 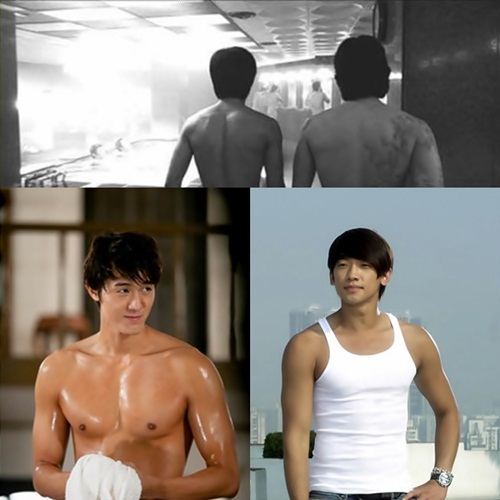 When debuting, Rain was well-known for his “pacific shoulders.” In his previous drama, there is a scene where he is sent to hospital. At the same, the width of shoulders which is similar to the stretcher, is occupying the stretcher to the fullness, triggering intense discussion.

The three “shoulder men” has a similarity, that they all have the height over 185cm, but have a small face.

Netizens said, “Shoulders that make everyone wants to have,” “The shoulders’ width of 3 persons should adds up to 5 meters,” and so on.