Th ring that wore by Ahn Jae Wook for unconscious Nam Sang Mi in MBC drama “Lights and Shadows” is a luxury product which has a retail price of approximately 5 million South Korean won (about USD $4295).

In the episode 58 of “Lights and Shadows” aired on June 12th, 2012, Lee Jung Hye (nam Sang Mi) falls into unconsciousness after encountering accident. Kang Ki Tae (Ahn Jae Woo) wears for her a diamond ring that serves as a wedding keepsake and said, “I love you,” and then sobs.

In the scene, the ring prepared by Ahn Jae Wook is a diamond ring specially produced by famous jewelry brand M company for the drama, with retail price approdximately 5 million won. 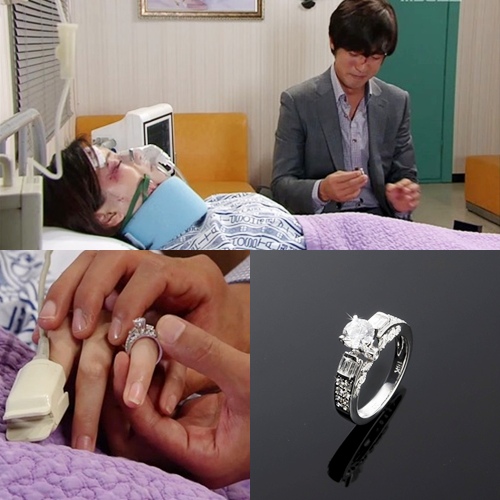 An official of M Company said, “After the broadcast, the inquiries about the ring come in a continuous stream. I can really personally feel the popularity of the ‘Lights and Shadows’.”

The official also added, “The ring that was worn on the hands of Nam Sang Mi highlights the overall luxurious details of design, it’s the top product that is getting attention from bride-to-be who is in pursuit of luxury.”