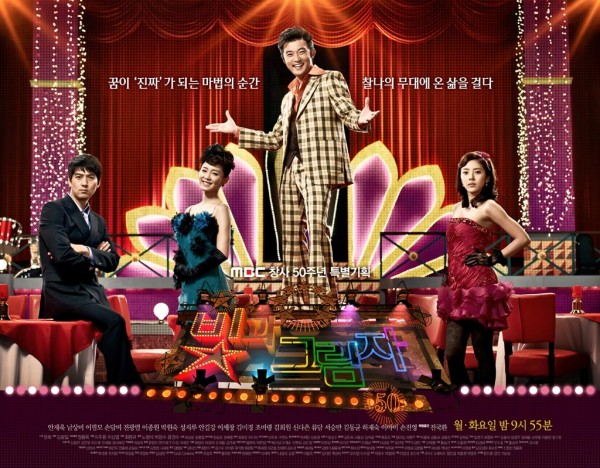 Preceded By: Gyebaek
Followed By:

Lights and Shadows storyline covers the 50 years period from 1960s to present day. With major historical incidents such as Vietnam War, May 16 military coup d’etat and the assassination of Korean President Park Chung-hee as background, the drama gives viewers an opportunity to look back contemporary history through observing people living in the shackling era.

The drama focuses on the world of mass culture and arts during the era, as the entertainment need of the public was fulfilled through theater before the popularity of TV. It probes the meaning of live through performing group at Chungmuro film studio and all over the country, and the love and desire between people.

“Lights and Shadows” tells the life of Kang Ki-Tae (played by Ahn Jae-Wook) who debuted as a entertainer at American military base stage for American soldiers and troops, and later works in show business. He is widely regarded as the godfather of the entertainment industry, can control the success and failure of those who wants to be star. But even with such great power, he still feels emptiness in heart, and the appearance of Lee Jung Hye (played by Nam Sang Mi) makes up the void. Lee Jung Hye is turned from ugly duckling to white swam overnight, and is active in show business, becoming a top star. The flickering of spotlight caused her to temporarily lose herself, and is mentally and physically exhausted with love of two men. In fact, the unlucky life has been indicated since she became a star.

43 responses to “Lights and Shadows”