Choi Kang Hee explained that the shooting location of Can’t Lose is very close to her home, and that since director Lee Jae Dong and lighting director whom she had known while filming the “Sweet Buns / Red Bean Bread” drama are on the set, so she pay her visit while on the way. 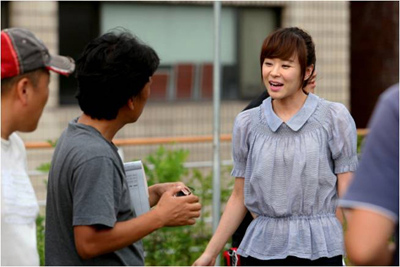 The appearance of Choi Kang Hee on the set of “Can’t Live with Losing,” and her conversation with the director and the casts, instantly made the atmosphere joyful.

Protec the Boss, of which Choi Kang Hee who recently has the image of “best selling female” is acting in, is fighting fiercely for the top rating in viewership. The Wednesday and Thursday drama Can’t Lose’s rating has gradually increased, and the visit of Choi Kang Hee to the set of Can’t Lose shows that the actors and actresses of the drama has the will to engage the competition in good faith.