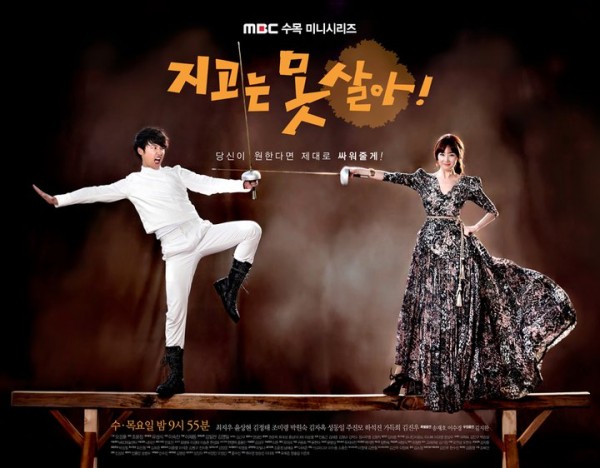 Preceded by: You’ve Fallen for Me / Heartstrings
Followed by: Me Too, Flower!

Eun Jae and Hyung Woo are a married couple who are both highly competent lawyers. They met and fell in love at first sight during a baseball game, subsequently married with vow of “Til death do us part”, without knowing each other’s occupations. Their relationship was initially sweet and loving, but their marriage slowly began to crack under their constant fights, and also because of different personality and values. They are now in the midst of their divorce proceedings, which leads to “fierce, but funny” episodes.

1. The divorce proceeding of lawyers

It’s almost as fast as storm passing from they met each other, married until talking about divorce.
And later even started a divorce fighting which is similar to a war.
The lawyer couple who never wants to lose, both cheating and been cheated to fight.
It’s easy to help others to divorce, but when it’s their turn, it’s hard.
Because when it’s happening to them, they lean forward emotional feeling rather than rational thinking.
How are they going to divorce?

2. The maximization of daily life

However, the process of the intense arguing is just a comical circumstance. The method of the fight is hilarious. There is lots of resonance because of quarreling. The reason for arguing is especially typical, but after arguing and get angry, how many husband and wife let feeling takes the upper hand and say want to divorce?
There is no real intention to actually divorce, but some people has almost step into the door of the court.
The cause of the argument, i.e. ya, woman must be like that. Really funny, man is even worse!It’s the similar reason used when we fight, husband and wife is all like this, so the resonance.
So, can once again look back at own married life. Recently a lot of TV drama series with heavy atmosphere, and it’s true that it makes viewers feel burdensome.
Put on a daily used coat on the serious divorce topic, continue the strong brightly and funnily.

3. Together ahead to things that want to help

They easily and has the capacity to handle their cases indifferently.
But they also encounter some cases which is wronged, and want to complain the law and in solidarity with their difficulties, so want to aid. Realizing the family love, the incidents happened during divorce proceedings let the couple gradually change and grow when dealing with the messy family matters, and leads to a lot of forgiveness and reconciliation.

4. Study and and investigation of divorce

Study about divorce. One word that every couple will consider at least once – divorce. Although this sentence is easy to blurt out, but in fact the process of divorce is not easy.
Through this process, want to ask a question: If divorce is the only positive solution?
Is not want the audience to follow and implement, but these stories are worth some careful consideration.
Seeing other people’s divorce process, do we see our own problems?