On April 27th, 2012, Girls’ Generation member YoonA participated in the press conference of KBS 2TV Monday and Tuesday drama “Love Rain” held at the vicinity of Samsu-dong, Mapo-gu, Seoul. She said, “I will certainly watch the acting of same-age actors,” revealing her passion to acting. And YoonA also said, “Heard that acting of Suzy in ‘Architecture 101’ is critically acclaimed, so I went to watch out of curiosity. The background is similar to ‘Love Rain’, and the role in the movie is very matching with Suzy, just like a person wears a fitting cloth, very harmonious. ”

When reporters asked whether she used to invited to star in “Architecture 101”, YoonA honked her mouth cutely and answered, “Until the final day of filming, I didn’t know about it.”

YoonA said, “I still do not have the experience starring in movie, if there is a chance, hope can like Suzy, playing a beautiful and innocent role. Although also very want to challenge the antagonist role, but the person who watches may feel a little awkward.” And she laughed after saying. 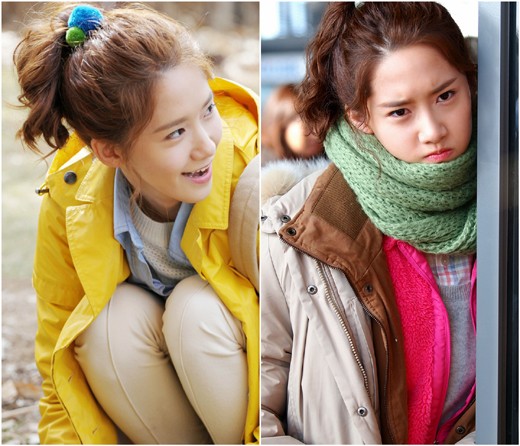 The 20-episode “Love Rain” is the comeback drama of director Yoon Suk Ho who directed “An Autumn’s Tale” and “Winter Sonata”, and as such attracted the concern of everyone, but although have now aired 10 episodes, it still rank last among Monday and Tuesday drama with 5% viewership ratings.

About such a low ratings, YoonA said, “My first drama ‘You Are My Destiny’ achieved 40% ratings, at that time I did not know that this is a high ratings. Until I shot the ‘Cinderella Man’, then I understood.” She went on to say, “In the past, I smiled while seeing malicious messages, but now I feel very hurt when seeing one. Now is the time for me to become stronger and grow.”