The idol drama In Time with You is not just liked by viewers in Taiwan, even the mainland China websites have accumulated more than 60 millions person-time have watched the drama series, and was selected as the most artistic idol drama for the year by the local media. The reason is because of the little love between male and female characters is close to the heart. With the popularity of the drama stormed ahead, there are many related topic on the lead actor “brother Da Ren,” and when lead actress Ariel Lin went back to school to participate in anniversary of the founding of the school, the juniors were not calling her senior, but sister You Qing.

In Time with You idol drama: Cheng You Qing likes this is very beautiful, never get tired of looking, what’s a pity. 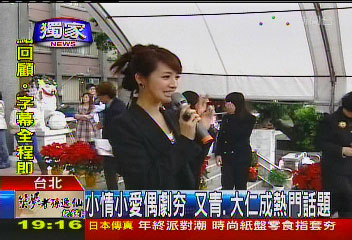 In Time with You is not only causing discussion in Taiwan, but has also conquered the viewers in China. The websites in China has accumulated more than 60 millions time of people watched the drama, and the drama was even selected as the most artistic drama of the drama. The reason for the drama series to be so popular is because the plot is logical, and the little love between male and female characters is close to the reality, instead easier to struck a chord with viewers.

Sister You Qing has apparently become synonymous with Ariel Lin. Even when she returned to her alma mater to participate in anniversary celebration, the juniors were not calling her senior, but her name in the drama. The photo of Ariel Lin who played the role of mature working class woman during her high school time also exposed. Ariel Lin said, “very precious, oh my god, don’t you think it’s precious.”

For actor Chen Bo Lin, the soulful image of brother Da Ren has helped him to regain fame, fueling heated discussions by netizens, especialy the style of wearing high school uniform in the drama. big Renge the play soulful image, but also his meteoric rise again, fueled heated discussions, in particular, the shape of the film wearing a school uniform, which is not much different to the movie “Blue Gate Crossing” ten years ago, where he played the role of Zhang Shi Hao.

Fans has called him as high school student forever. On the Internet there are many discussions about brother Da Ren, no matter it’s street sign of Da Ren Street, warming bag of Da Ren brand, there are also many teachers who set up exam questions based on Li Da Ren and Cheng You Qing. There was even netizen who parodied the packaging of biscuit, hoping that they will together.

Although the idol drama has concluded its broadcast, but the effect of You Qing Da Ren will probably continue for quite some time.