Actor Ji Hyun Woo and Yoo In Na have successfully passed the hurdle of ‘first time’ together.

In the episode 1 and 2 of “Queen In-Hyun’s Man” premiered on April 18th, 2012, the nameless actress Choi Hee Jin (Yoo In Na) who become lead actress of drama overnight and Joseon Dynasty scholar Kim Boong Do (Ji Hyun Woo) who travels through 300 years of time to come to modern era meet fatefully for the first time.

Ji Hyun Woo stars in historical drama for the first time in “Queen In-Hyun’s Man”. Ji Hyun Woo who plays the role of flowery scholar is showing his acting skill with new look and natural interpretation of lines. He also challenged all difficult action scenes with sword without a stunt double, demonstrated his enthusiasm for acting. 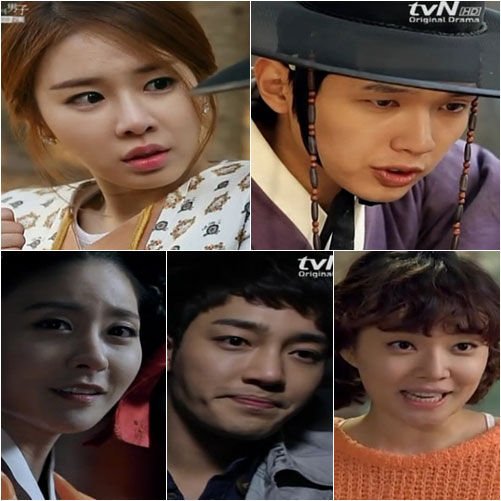 Yoo In Na plays a leading character for the first time in “Queen In-Hyun’s Man”. She said that because the personality of the character is very similar to her personally, so it reduces a lot of burden for becoming lead actress for the first time. Similar to Choi Hee Jin in the drama, Yoo In Na who prepared for a long time before debuting as a actress wants to perform in acting for the love to Choi Hee Jin.

In the drama, Choi Hee Jin accidentally drops her phone into sewer when trying to answer the call from the director who is conducting audition for the drama. But she endures stink smell to answer the call, and receives the notice of successful audition from the director, “Let’s cooperate together.” Choi Hee Jin forgets about the vision from the surrounding, and feels the taste of pleasure after suffering with head down facing the sewer’s opening. The attitude of Choi Hee Jin is both despair and simple.

But there is also worry that the structure of shuttling between Joseon Dynasty and present day will be lack of concentration. Production company removes the CG from the instant movement scene which gives a rough feel while expressing traveling between now and past, making the plot naturally coherent through omitting scenes.

In order to highlight the love story of Choi Hee Jin and Kim Boong Do, the characters around them is made heavy. Will the continue existent of soapy Han Dong Min (Kim Jin Woo) around Choi Hee Jin triggers the jealousy of Kim Boong Do, or promoted to the level of cherish man in the plot development, remains to be seen. While the evildoing of Yoon Na Jung (Park Young Rin) who is the thorn in the eyes of Choi Hee Jin cannot get excessive, it’s also hope that Choi Hee Jin who is kind-hearted like a fool been played by Yoon Na Jung.

“Queen In-Hyun’s Man” which does not have many characters shows all conflicts and characters related to love and friendship in just 1 episode. It’s hope that the drama does not simply highlight the two roles of Choi Hee Jin and Kim Boong Do, but becomes a romantic comedy with a rich story line as a starting point to carefully portray the sensibility of seasonal change period.