I never thought that Jung Woo Sung is a special actor. He who appeared in the “Beat” in 1997, was very matching with Ko So Young, that is to say that he was just a role that served as a foil to Ko So Young in rival play. The same is true in “A Moment to Remember” and “A Good Rain Knows,” he was an image that courageous but gentle, merely stopping at satisfying the fantasy of female towards man. In “The Good, the Bad, the Weird,” he seemed to assume the function of visual effect.

Later, in the incident of Seo Taiji and Lee Ji Ah, his silence began to let me start to have interest on him. Of course, I don’t know what Jung Woo Sung said in private, but from his remarks in the media, he did not say anything that would lead to scandal. I think this silence, is coming from courtesy and care for each other, respect for oneself, and the sincere for personal sorrow and pain. 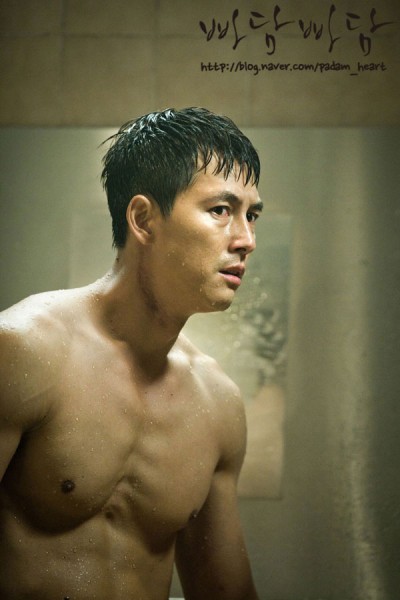 He is obviously old. Born in 1973, according Korean calendar he is already 40 years old. His skin also looks a bit rough, when smiling, his corners fo the eyes have a deep crow’s feet, the wing of nose somehow no longer glistening with light like before, between teeth also seems to have a little gap, and half of the forehead that is revealed also flat in some way.

He is not old because of nearly 40-year-old, and he does not as old as 40-year-old. There is some strength to make him grew old, I saw the kind of force that revealed through his eyes’ expressions in the integrity.

Sometimes, we will find an elderly person is beautiful. Prior to this, I have been unable to understand the reason. Now I understand, it is because of his / her eyes’ expressions lit up his face and the body.

About aging, in some ways, is to have an eyes’ expressions that are more profound and thorough, carrying the some kind of meaning that can only be sensed.

via: A translated commentary by Han Gwi Eun