Kim Sun Ah Has a Daughter? Exactly the Same

Actress Kim Sun Ah published the photos of “daughter” which looks identical to her.

On June 14th, 2012, producer of MBC drama “I Do I Do” published the photos of the “daughter” which is resembling Kim Sun Ah who is playing the role of Hwang Ji An, where they’re enjoying the summer afternoon together.

An official of “I Do I Do” said, “This scene where ‘little Ji An’ appears is the imaginary scene by Kim Sun Ah.” He added, “This mother and and daughter are as if duplicated from head to toe, the look of closed lips, tilted head, sitting on the lawn painting shoes sketch, are virtually exactly the same.” 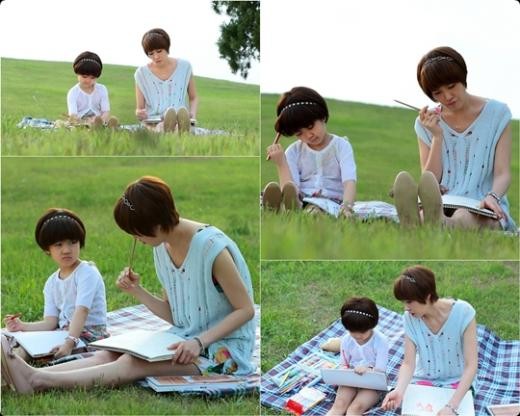 The scene has its wherefore. In episode 5 of “I Do I Do” aired on June 13th, 2012, Hwang Ji An is facing the biggest crisis in life, that is pregnant, which made Hwang Ji An very confused. Hwang Ji An who never committed the slightest mistake on work, is making repeated errors, making people around could not help but surprised. Therefore, Hwang Ji An decides to abort the tiny life in her tummy, but she couldn’t made up her mind in the obstetrics and gynecology hospital, and as the result, “come back empty-handed.”

The fantasy scene of Hwang Ji An living together with her daughter in future will have what kind of effect on the decision of Hwang Ji An is arousing great deal of curiosity on the audience.

2 responses to “Kim Sun Ah Has a Daughter? Exactly the Same”