In the scene, Suzy and Lee Hyeon Jin are sitting on the bench under the cheery tree. They affectionately look at each other with fallen flowers scattering and flying around like snow flakes. Lee Hyeon Jin looks at the while yogurt left at the corner of the Suzy’s mouth, and slowly approaching her head on with smile. After a short exchange of vision, their lips gently touch.

In the published photo, their lips are as if touched but not touched, the image is fluttering the heart, yet beautiful and pure. 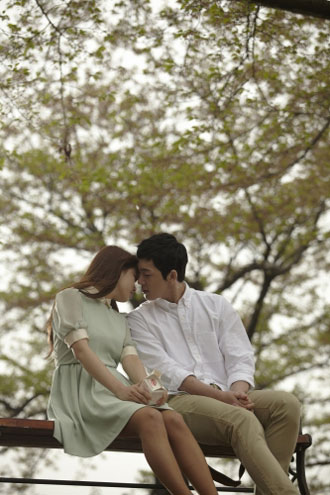 Such a beautiful picture makes male fans could not help but envy Lee Hyeon Jin who grabbed the heart of Suzy, and also gave female an lingering afterthoughts to “yogurt kiss.”

Once the CF scene was made public, various entertainment bulletin boards and SNS were bombarded with the messages of the fans, “The smile of brother Hyeon Jin captured my heart,” “First love knot, together with beautiful kiss scene, really envy Hyeon Jin!” and so on.