Sonia Sui Tang is Ready and Wants to Marry

Sonia Sui Tang is gaining popularity because of The Fierce Wife, in the drama she was playing the role of wife, but how about the planning to marriage in reality? She said firmly, “I am half-confident in relationship and marriage, but another half of 50% I can’t fully control, but at least the part of me is certain, I am firm in wanting this part, never thought of don’t want it for even one second, and the faster the better.”

Received praise in her career, her relationship life has also attracted attention everywhere. When appearing in TVBS’s talk show “The People” (看板人物) generously expressed that she is ready for marriage, and hopes that the sooner the better.

Not know to many people, Sonia Sui was sent to Poland for five years at age of 14. She who looks strong externally, thinking back the lonely and helpless of the year, she was so sad and burst into tears in the program, saying, “It’s impossible not to be strong when living alone there, if showing weakness will only get bullied.” But she who was still young by then had to learn to live independently, inevitable that there was time when her feeling got out of control. At that time when her mother wanted to know “How are you in Poland?” Sui Tang got in a rage and answered, “What’s the point of knowing, even if something happens to me here, you can help me to solve.” 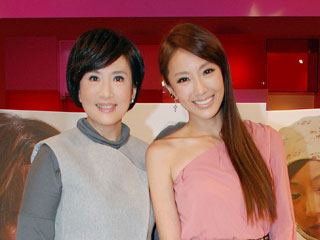 But now her heart is full of gratitude, and said sweetly to her mother in front of the camera, “This lonely memory is a scar but is also a fountainhead, I really do not regret to the time when was in Poland, because there was always people who loved me by my side, mother please doesn’t feel guilty.”

Mentioned again about the superb performance by Sonia Sui in The Fierce Wife, although she missed the Golden Bell Awards, but she said, “Just like buying lotto, hit 5 numbers, and with 1 more matching number will win billion dollars prize, but even just matching the 5 numbers also can win two hundred-plus thousands dollars prize money.” So she said that somebody will feel bad, but she feel that she is very unlucky.

The acting of Sonia Sui Tang has been affirmed by many viewers, and now her father has also came out to support her, “Since young she has strong desire to perform, and got a lot of scars on her body and face from throwing, so I used to not allowing her to pursue the road to stage, not hoping the baby daughter to develop her career in entertainment industry.” But after parents watch her hard works been rewarded, now is allowing her to have career in entertainment industry with piece of mind.