SNSD member Yuri has a dazzling performance in the SBS drama “Fashion King“.

Recently, Yuri had an interview with a Korean female magazine. Here’s translated part of the interview.

Yuri was wearing a yellow jacket, dragging the rack while talking on the phone. Her sudden appearance scared Yoo Ah In. She said to him coolly, “I don’t have time, get out.” This is the scene in episode 3 of “Fashion King” where the two first met. The lines of Yuri is all in English, while the last sentence, “get out,” perfectly expresses her apathy and irritability. She not only speaks English like local, but also conveys her feelings.

Yuri is unlike Tiffany and Jessica who lived abroad. “I’ve been thinking of waiting to act before I debuted, when I was a trainee 7, 8 years ago, I have thought of it for 10 years. I continuously attends the acting class and reads the script alone. Then, I feel happy I can star in a drama. I met director for 10 times before the filming started, because director did not know me very well, and has no way to identify my acting, so he gave me a lot of opinions. My biggest fear was to act using English. Anna is a famous and experienced designer in New York, so she cannot just smoothly speak, but also must attentively express the emotions. When practicing, I will use a tape recorder and camera to record and keep repeating the listening.”

Girls’ Generation member YoonA used to star in “You Are My Destiny” in 2008, Jessica also starred in “Wild Romance” recently. Comparing with them, Yuri who wanted to act and prepared for 10 years started relatively late. Unlike other members, up to the broadcast now, no one is criticizing her acting. 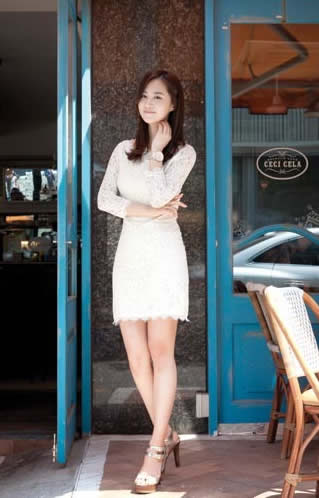 “It’s like my character, very similar to Anna, I want to show a more complete state. Whether it is in English, acting, singing and dancing, I want to show sincerity. In order to express this image, I must be familiar with it. And in order to become familiar with it, I have to keep practicing hard, I think this is why I spent a longer time.” Lastly, Yuri was selected by fans in MBC variety show “Show Champion” as the member of Girls’ Generation who has the best body. Even the members of SNSD also said, “We envy the healthy body of Yuri.”

Fitness instructor Sean Lee said in the SBS program “Victory”, “One members like Sooyoung has naturally born body, but the perfect body of Yuri come from her continuous efforts in exercising.” The choreographer teacher of SM Entertainment, Shim Jae Won said, “Everybody will stand on the stage to accept the teacher’s criticism in the end, if one doesn’t work hard, it will become their scars, even if this stage is their dream, there is no way to bring them happiness.” Even pop groups like Girls’ Generation also need to continue to grow to get everyone’s attention no matter where they are.

This is why Yuri’s words can not be taken lightly, “Although I look very attractive, but there is a lot of hardship on the painstaking road which others couldn’t seen, making me shaking and giving up, but I keep telling myself that this is only a temporary moment, I will stand up again. Because we get a lot of love and other things from everyone, so we have the responsibility to repay the love. This is why no matter how difficult or hard, I cannot give up, and which is why no matter how hard, we can get the strength to face it.”

In May, the autobiography-style film of SM is releasing, and Yuri wrote on her individual poster, “I can fall but I will not give up,” which is why Yuri, regardless of as singer or an actor, would succeed.