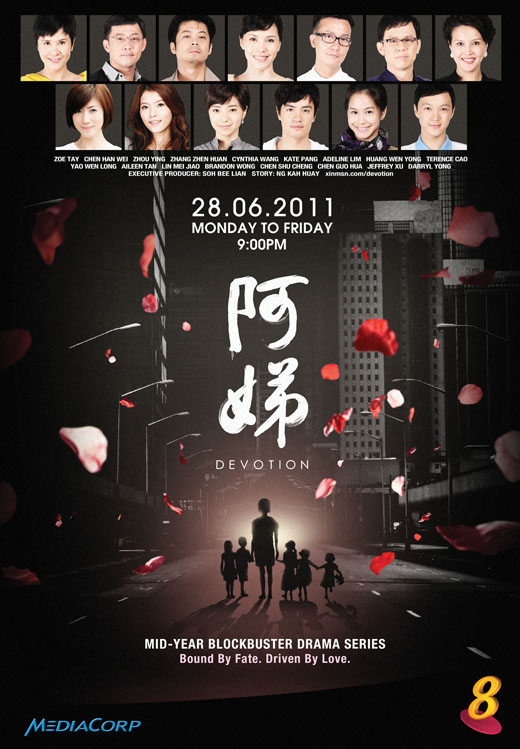 Preceded By: C.L.I.F.
Followed By: On the Fringe

A-di alias Liu Zhaodi (Zoe Tay), is born in the 60s amidst sand quarries during the heyday of sand quarrying. Zhaodi, the fourth daughter in the family and whose name means “brings a younger brother”, is given away to an uncle after her mother finally gives birth to a boy. He mistreats A-di like a maid. When she was little, A-di falls into a quarry pond and was saved by Huang Dake (Chen Han Wei). Love blossoms between them after they are reunited in adulthood but A-di is forced by her foster father to marry Xu Zhongzheng (Huang Wen Yong), the boss of a garment factory.

Sand quarrying enters the annals of history in the late 80s. A-di marries and moves away but returns on a certain date every year to mourn by the sand pond, thinking that Dake is dead.

Fast forward to the 90s – Keqin dies of cancer, leaving “Home Flavour” to A-di. Despite her tussle with Keqin’s sister over the control of the soy sauce business and the numerous obstacles she encounters, A-di remains undaunted.

Raising five children has been a bittersweet experience for A-di. For 20 years, the career mother has never once entertained the thought of giving them up even in life’s most difficult moments…

Yuanfang and Shanshan’s parents were jailed for murder. Brainwashed by her father, Yuanfang is convinced that A-di is responsible for his imprisonment and plots to seek revenge. The rebellious Shanshan is also causing A-di much grief.

Shuangjie is close to A-di and protective of Siwen, He feels for Siwen but realizes that he loves Shanshan. The love triangle between Shuangjie, Siwen and Shanshan leaves them entangled by their relationships.

Siwen loses her hearing in a childhood accident. She falls in love with Shuangjie while Yimin, an autistic worker in the packaging section of “Home Flavour”, is secretly in love with her. During an outburst, he almost kills Siwen. Yuanfang appears at the scene, kills Yimin in self-defence and accidentally caused Siwen’s death.

A-di and Shuangjie are implicated in the murders. A-di saves Shuangjie by accepting culpability. Rejoicing, Yuanfang attempts to seize “Home Flavour” with Shanshan’s mother. Fortunately, their cahoot is exposed. A-di blames herself for Yuanfang’s misdeeds. She turns herself in to the police after persuading Yuanfang to turn over a new leaf. Yuanfang is filled with remorse…