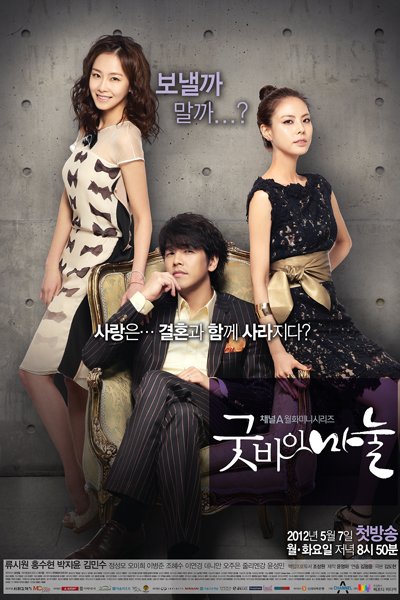 Preceded By: The Strongest K-POP Survival
Followed By:

Goodbye Dear Wife” is a romantic comedy that tells the story of a couple who has married for 5 years, and starts to develop sense of boredom to each other. The thoughtless husband dreams of reuniting with his first love, and a wife gets confused when her long time lover who dumped her returns. As the result, they divorce, but only to discover that their true love is each other after a series interesting events.

Cha Seung Hyuk is the CEO of a famous sports center and has been married for 5 years. In his past, he was a famous fighter with good looks. Cha Seung Hyuk then married Kang Sun Ah who was about to become a nun. Because of their marriage, Cha Seung Hyuk became even more popular as a romanticist. Since then, he has partaken in lots of commercials and has become an ideal man for women.

In real life though, Cha Seung Hyuk did love his wife deeply, but with the passage of time, the love no longer has passion, and he is sick of married life, and is only maintaining the marriage of responsibility. However, his wife Sun Ah has known that her naive and immature husband is dreaming of reuniting with his first lover. So they divorce, and he says goodbye to his wife, while both of them secretly monitoring the actions of each other.